Teardown started as a technology experiment and it’s one of those games where gameplay was designed to fit the technology, rather than the other way around. It’s not the first time I’ve been involved in such projects (Sprinkle, Smash Hit), and probably not the last, but Teardown was by far the most frustrating experience yet.

The idea of a fully destructible environment is compelling for the player but a nightmare for the game designer. Walls can no longer be used as obstacles, key objects that the player might need to complete an objective can break and the designer is no longer in control over a players path through the game, potentially breaking the intended progression. Not to mention all the technical hurdles a fully destructible environment implies when it comes to physics, lighting, scripting, etc, but more on that is a future blog post.

Destruction is often used in games as a decorative special effect, but for Teardown the intention was always to use destruction as the key element in gameplay and with a limited amount of action, allowing the player to do detailed precision work rather than total mayhem. 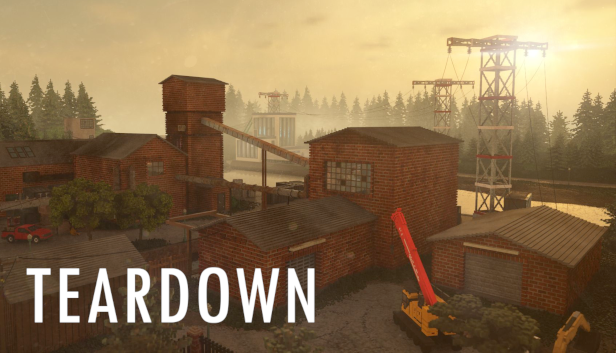 After nearly a full year of experimentation and many failed prototypes, the idea of a two-phase heist setting was born. It’s compatible with all the limitations (or lack thereof) that a fully destructible environment impose, while still offering an interesting challenge. It allows the player to move around freely in a fully accessible environment, carefully planning the heist and creating shortcuts using destruction, vehicles and objects from the environment in a creative way. The player chooses when, and I think it’s important that this is the players decision, to go into action mode and try out the created path.

Allowing the player to destroy everything has a huge impact on level design. Since any wall can be torn down, the only true obstacles at our disposal are elevation, distance, water and unbreakable objects. We could use unbreakable objects more, but it would make the environment harder to read and imply a failure to deliver on the promise of a fully destructible environment. Therefore unbreakable objects are only used for rock formations and the ground you’re standing on.

The relatively small level size started as a technical limitation, but I don’t think the game would benefit from larger levels even if it was technically possible. Villa Gordon is currently the largest level in the game, and it can already be a bit tedious to walk around during the preparation phase. Personally I think the game shines in a more compact and cluttered environment like Hollowrock Island, with some verticality to allow for more interesting shortcuts.

The only place we found the level size to be a limitation was the end chase on Frustrum level. We originally anticipated it to be twice as long, but due to a 3D texture size limitation on AMD graphics cards, we had to restrict it to 400 meters. We could have made it twice as long using a U-shaped level, but we also wanted to keep the level straight to have the goal direction consistently aligned with the sun.

The timer and the chopper

Nobody likes a timer, and in previous iterations of the game idea there was no timer. Since the game offers so much player freedom, the only viable option to impose any form of challenge would be resource limitations, and for a sandbox game where destruction plays a central role, adding restrictive resource limitations just doesn’t make the game fun. The goal with the alarm timer has always been to offer a challenge even with a generous amount of tools and resources. While I can agree that a timer is usually a bad idea in game design, I’m really happy the way it turned out in Teardown.

Along the way we’ve mixed up the timed missions with other types where the challenge comes more from moving heavy objects, demolishing buildings or putting out fires, but I’m not convinced that alone could support a whole game. In several missions there are alarmed targets attached to something heavy, allowing it to be moved around to some extent, which I think is a good mix, letting the player choose whether to tinker with the environment or just make a run for it. 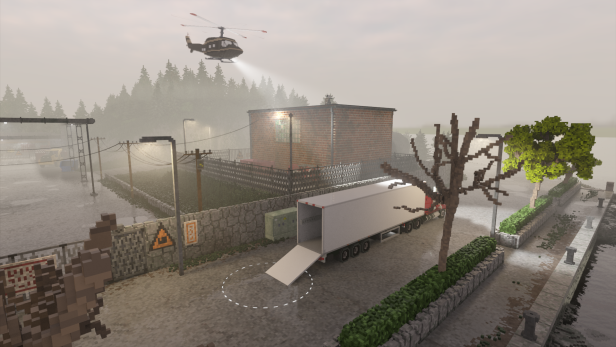 A popular suggestion has been to have the security chopper chase the player after arriving to the scene instead of instant failure, but as a general solution I don’t think it’s a good idea. It would introduce an element of randomness that would discourage the strategic thinking and careful planning that this game is all about, in favor of just replaying the mission until reaching the escape vehicle before dying. So instead we added a separate mission type that still allows the player to make preparations, but the chopper shows up shortly after clearing the first target, effectively replacing the timer with an enemy. I think both mission types work well, but that doesn’t necessarily mean it’s a good idea to combine them.

Quicksave can be a sensitive topic in game design. For linear games it’s often a tough decision whether to offer quicksave at any time or save progression only at certain times or locations. Some players refuse to use a generous quicksave feature, as it could be considered cheating.

This is something I think turned out particularly well in Teardown - allowing just one save slot, freely available at any time during preparation, but disabled as soon as the alarm goes off. It encourages player experimentation during the preparation phase, but since there is only one slot, it must still be used wisely. Even with quicksave available, a major change of plans often requires a full restart anyway due to resource limitations, vehicle condition or broken objects.

Trying out a route and then go back to the planning phase for improvement is a key part of the core loop and so intrinsic to the game that we actually enforce it in the third mission to communicate that this is the intended way to play the game.

Since any mission can be played in an infinte number of ways there is already natural incentive for replayability, but there are a couple of things in the game specifically designed to increase replayability. Most missions have optional targets that will increase the score. These optional targets are often placed in strategic locations that break up the most efficient path of the required targets, encouraging the player to use a different strategy and/or starting location.

New tools and upgrades introduced later in the game make all earlier missions easier to complete. It gives a natural incentive to go back and replay missions with better tools, clearing more optional targets, which increases score and gives even better tools, forming an outer game loop that can be quite rewarding. Admittedly, for this to have a strong impact on the game, there would need to be more optional targets. However, introducing a lot of optional targets early in the game can be quite overwhelming, so the whole thing might need to be redisigned a bit to work as intended.

Let’s be honest - no one plays Teardown for the story, but I think it serves an important role to frame the missions and as an incentive for progression. It was an early decision to deliver the story in the form of one way e-mail communication and I’m quite happy the way it turned out. Since the player can go back and read old e-mails, it’s possible to catch up on the story when coming back after taking a break from the game. This is something I miss in a lot of other games - the ability to recap the story when coming back to them.

The reason e-mails cannot be replied to is part of the bigger goal of making the player fully anonymous. The main character in Teardown is intentionally lacking name, age, gender and personality traits to fully leave that up the players imagination. 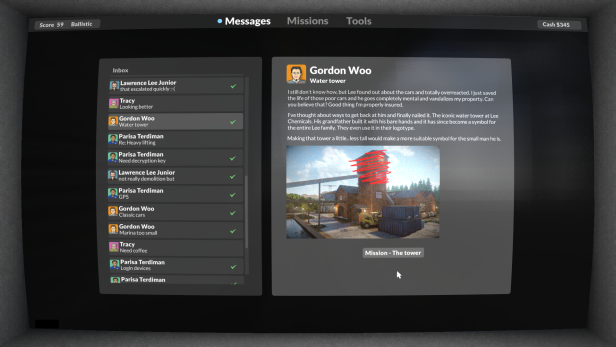 The story is also told through the environments, how they progress, descriptions of objects in them, themed valuables and last but not least the television. There’s a lot of room for improvements here. I originally envisioned much more environmental changes when coming back to the same environment (also involving procedural changes based on the players actions) but for several reasons we had to cut back on that.

Missions are kept separate from the e-mails on the Missions tab to give the player an overview of available missions for a particular location. This is to further incentivice replayability and make it clear where improvements are possible to increase score and rank.

Whether to have sandbox levels directly accessible or tied to campaign progression has been a long internal discussion. Knowing that a lot of people would want to play Teardown just for the sandbox experience, it may seem a bit inconsiderate to enforce a complete playthrough to make everything accessible. On the other hand, keeping all environments and tools available in sandbox mode from the beginning would ruin the experience for campaign players.

The route we chose was to keep them locked, but introduce new environments and tools relatively early in the campaign. The first three environments can be unlocked after completing just five missions while the fourth one requires a bit more work. While not suiting everyone, I think it turned out quite well, and I hope more people play and enjoy the campaign because of this decision.

Tool upgrades also carry over to the sandbox mode, which gives a stronger incentive to scavenge valuables and upgrade tools in the campaign.