Sooner or later everybody will need uniformly distributed points on a sphere. There doesn’t seem to be a standard method for doing this, so I wrote a very simple iterative algorithm that pushes verts away from each other while continuously normalizing the point data. This will eventually find a stable state where the distance between any two neighboring points are very similar. Performance is terrible but it gets the job done, so only use this for offline stuff. There is also an option for distributing points on a hemisphere (y>0). Set the number of iterations to at least the number of input points for a good distribution. 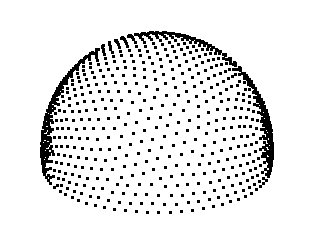