For a long time I've wondered how impulses develop inside a rigid body solver. Mainly for trying to come up with a prediction of where the final magnitude would be as early as possible. I dumped the data for all impulses out to a CSV file and graphed it for a couple of simple test scenarios. Let's start with a small test case, a box pyramid of two layers (three boxes). All dirty tricks are switched off, so this is a plain vanilla solver. The Y axis is impulse magnitude for the normal impulses and the X axis is iterations. 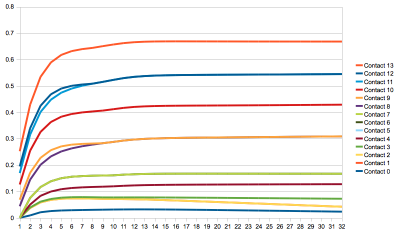 At a first glance, there seems to be no suprises here. Impulses form asymptotic curves towards their solution and there is not a lot of action after about twelve iterations. But look again, especially at the bright yellow curve, that seems to steadily decrease and form a non-horizontal asymptote, and what about the deviation around iteration eight and nine? Let's try a more complex exmple, with a box pyramid of five rows (15 boxes). There is around 90 contacts, and it would be too messy to show them all in the same graph, so I chose ten of them from the middle of the stack: 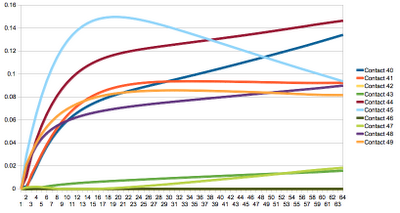 This is quite interesting - most of the curves are asymtotic to a non-horizontal line. Even at 64 iterations they have not found a stable configuration. Most interesting is maybe contact 45, which first goes up and then steadily decreases, while most othe contacts increase. Somehow, the solver is shifting around the weight. Maybe just because it can. Another graph we could study is the relative velocity along the normal direction (v from my previous post) and how it changes while iterating: 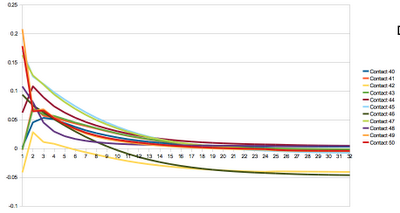 This graph is from the same scenario, but it's not from the same run, so contact numbering might not match exactly. Interesting here is that all curves steadily decrease after just a few iterations and seem asymptotic to a horisontal line, so our odd graph fellow above doesn't actually mean that the velocity is shifting similarly. Most likely it is an effect of an overdetermined system (with four co-planar contact points, we can shift the impulses around a bit and still get the same result. Not that the solver really has a good reason to do this, but it seems to be doing it anyway).
I also tried a variant of the solver that doesn't clamp accumulated normal impulses. Hence, the delta impulse is just clamped to be positive at each iteration. This prevents the accumulated impulse to ever have a negative inclination: 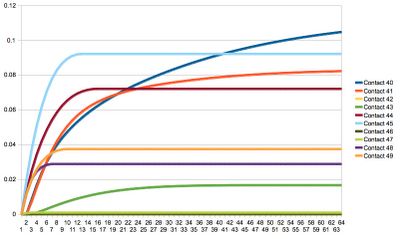 This is more what I expected. Each impulse is asymptotic to a horizontal line. Now if there only was a way to predict that asymptote and use it as initial guess, we would end up with a really stiff solver without having to keep track of contact points from the previous frame. I'm personally quite sceptical that it can be done from just looking at the curves, but it might be worth a shot. What i find most interesting is how good visual results you can get from just terminating the whole proces after three or four iterations, considering how far off the curves are.